The 4 Stages of Succession Planning

See the future by planning for it

Predict your company’s future talent needs and choose the best candidates for the most important roles, by using our best in class software to implement the 4 stages of succession planning. 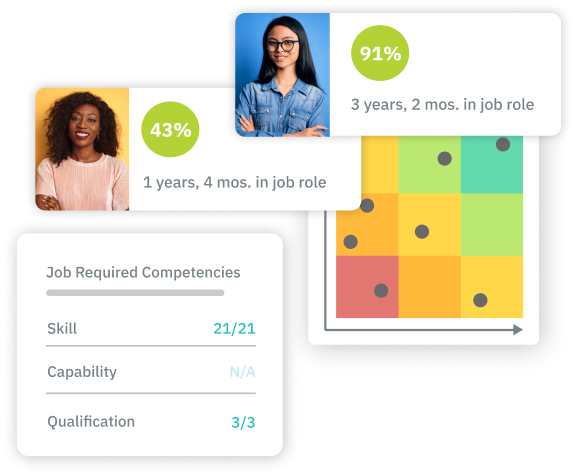 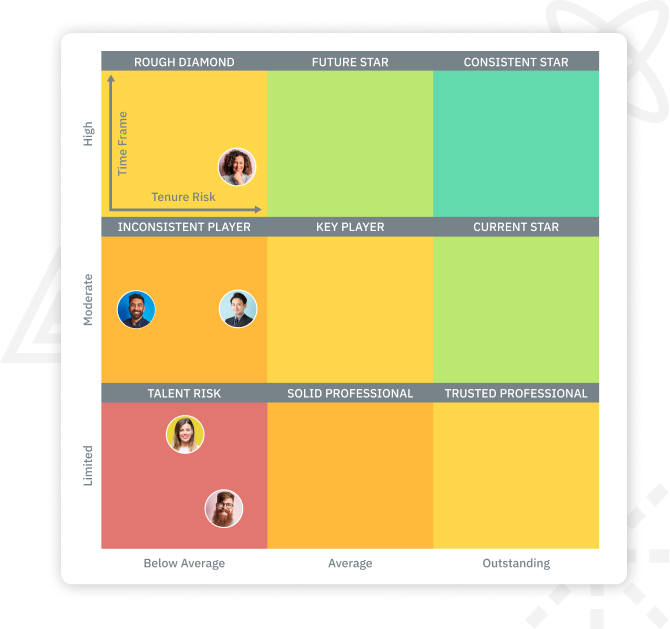 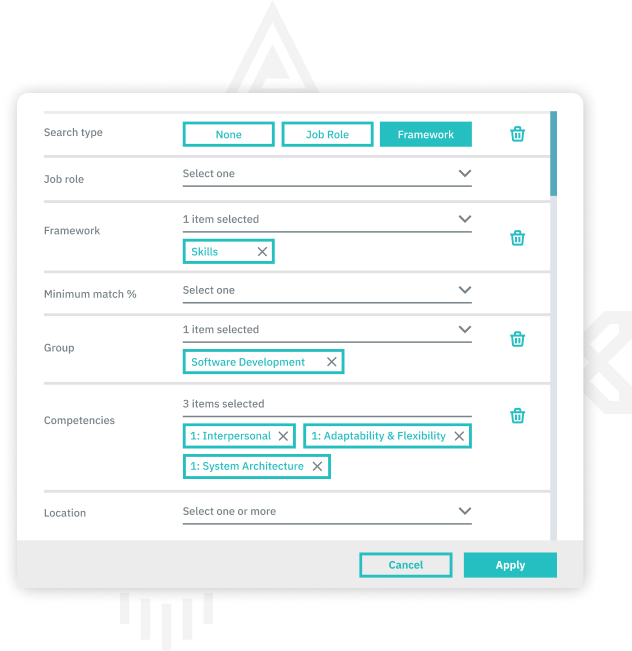 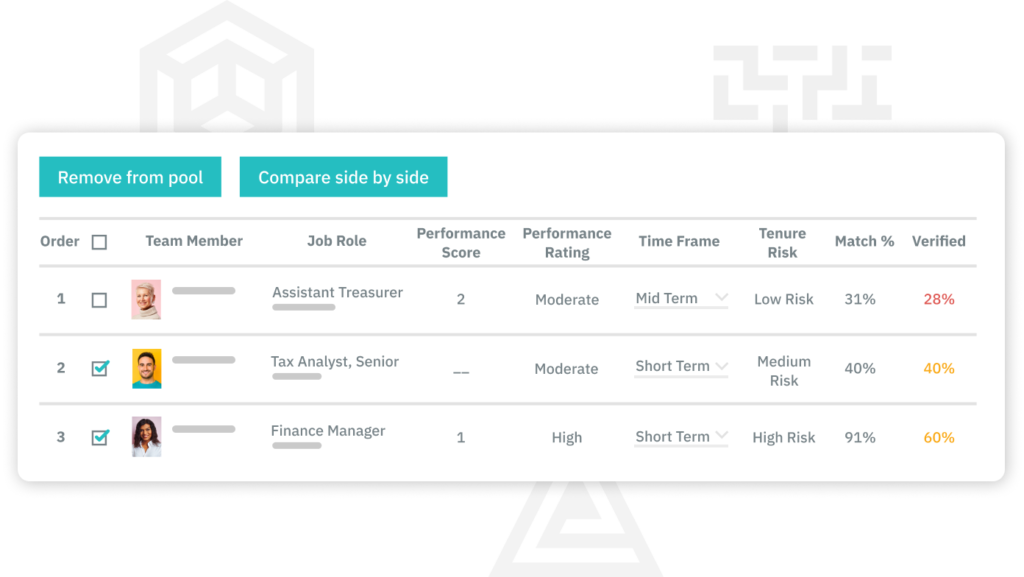 A clear view of future needs

Enable managers to see their teams’ bench strengths, tenure risks, and gaps in role succession so they can develop their people with an eye to the future. 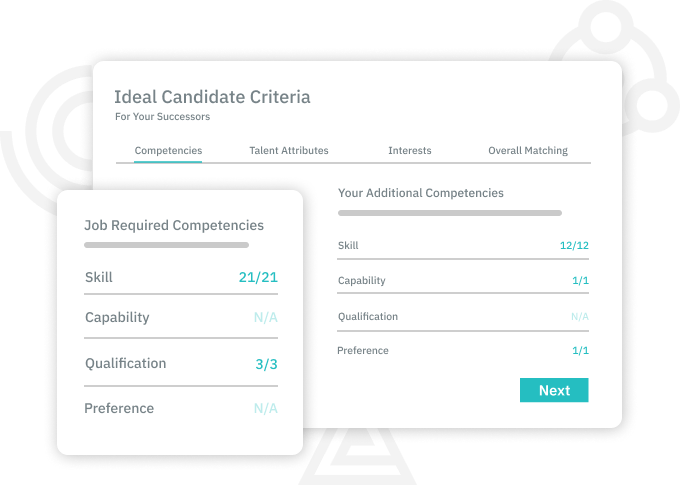 Wish you could find someone just like your top performer? Use this flexible tool to define the skills, experiences, and other characteristics of your ideal candidate and find internal talent that matches.

At any given time, key leaders can transition out of their roles with little notice due to new opportunities, retirement, relocation, personal reasons, or other reasons. While 30-90 days may be enough time to find a candidate with the right skills, it’s highly unlikely that they’ll have the historical context or relationships that would accompany an internal promotion. Likewise, being forced to hire externally because of lack of preparation can be disheartening and disengaging for existing team members who have growth aspirations.

Succession planning best practices involves identifying the organization’s future staffing needs and the people within the company who have the potential to be successful in those roles. It also involves developing the skills and competencies of those people in advance, so when the role opens – whether anticipated or not – there is a qualified individual prepared to fill it.

Succession planning models include four key stages. In stage one, you’ll choose the software you’ll use to support your succession planning policy and strategy. In the second stage, you’ll assess key positions within your organization, recognizing that not only employees near retirement will exit in the next five years. In the third stage, you’ll identify the individuals in your organization who have the desire and potential to fill those roles and assess their skills and competencies to identify any gaps. Finally, you’ll create and execute a development plan to bring their skills and competency up to par for the role they’re being positioned to fill.

Success planning best practices include being proactive about unforeseen departures, engaging stakeholders early in the process, choosing employees thoughtfully based on skill and potential, sharing frequent feedback throughout the implementation of the development plan, and holding trial runs, allowing the successor to practice what they’ve learned before the exiting employee departs. Organizations that work through the four stages following these best practices will set succession planning examples for their industry.

It’s important to note that there are two primary types of succession planning. Emergency or contingency plans are the plans that outline how the company would continue to operate in a period of unexpected transition. Long-term or proactive plans are purposeful and deliberate and include preparing your team members to fill shoes as they empty in future years.

While many companies only have succession plans in place for their key executives (i.e. leadership succession planning), the most successful organizations plan for all roles. A hospital can’t operate without skilled nurses, radiologic technicians, and phlebotomists, so planning only for the CEO and CNO would be a missed opportunity. Identifying those who have the interest and potential to develop their skills (through formal or informal training, depending on the setting and the role) can help you prevent costly skill gaps despite turnover.

Although methods of succession planning and the exact succession planning process will vary from one organization to another, certain aspects translate well despite your industry or company. You should be able to adopt the following in any industry:

When you leverage technology for effective planning, the system will help you identify key positions and then outline the skills and competencies necessary for success in those roles. Depending on the solution you select, it will also allow you to match candidates to future roles based on their existing skills, their potential, and in some cases, their self-disclosed interests and career goals. Then, by comparing the skills required for the role to the candidate’s demonstrated skills, the system will identify gaps and automate development planning and tracking over time.

As you work through the steps in succession planning, losing momentum is common. That is, starting development plans and then failing to follow through on those plans happens often in organizations counting on manual and paper processes. Automation keeps planning and development at the forefront.

Before implementing new solutions, it’s important to understand the advantages and disadvantages of succession planning.

In conclusion of, succession planning is the process of planning for expected and unexpected turnover in all critical roles throughout the company – both leadership and non-leadership level. There are 4 stages of succession planning: implementing a software solution, assessing key roles, identifying employees with the skills and potential, and creating and implementing development plans. Effective succession planning requires frequent conversations with employees about their skills and aspirations, honest feedback about growth or gaps, and development plans to bridge the gap between current state and future state.

Organizations who succession plan are able to promote from within, providing employees with opportunities for advancement and retaining their own employees throughout the lifecycle of their career. Software is central and integral to positive outcomes and return on investment in almost every case.